So 2.10.0 is finally released after being in the works for 8 months, the longest gap between a release since the rebranding. The first change you’ll notice is the version bump to 2.10.x; HexChat has been a horrible abuser of the micro version number introducing many breaking changes between releases so hopefully we can stop that.

Not many new features were added in this release but internally and externally a lot has been cleaned up as well as numerous bug fixes (but not the infamous reconnect crash on Windows). See the links for the full list but here are some highlights of the more visible changes.

Technically HexChat has worked on OS X for a while but it was never distributed, tested, or improved by any developer. There has been a huge push to make it usable and integrate with the OS. Starting with this release there will be an official app bundle. This bundle is built on 10.9 and ships with Python/Perl support, a custom GTK+ theme, spell check support, app menu integration, and more! It is not without issues still but it is very usable. Here is a screenshot: 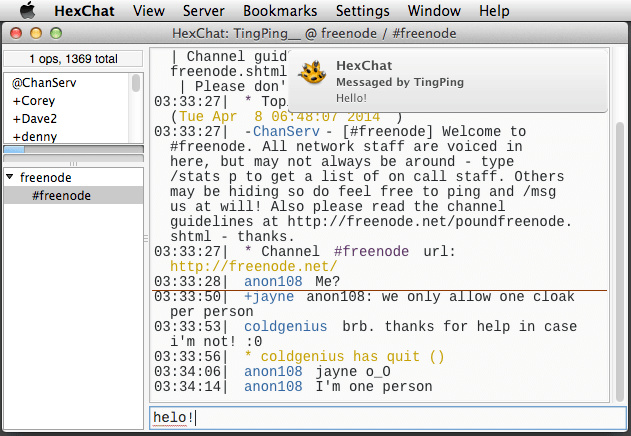 Every single window under the Settings menu has been changed in some way either minor redesigns or entire rewrites. One such rewrite was keyboard shortcuts. It is now more consistent with the rest of the application and now stores the config in a new format (which automatically updates) that is more portable. Here is a before and after: 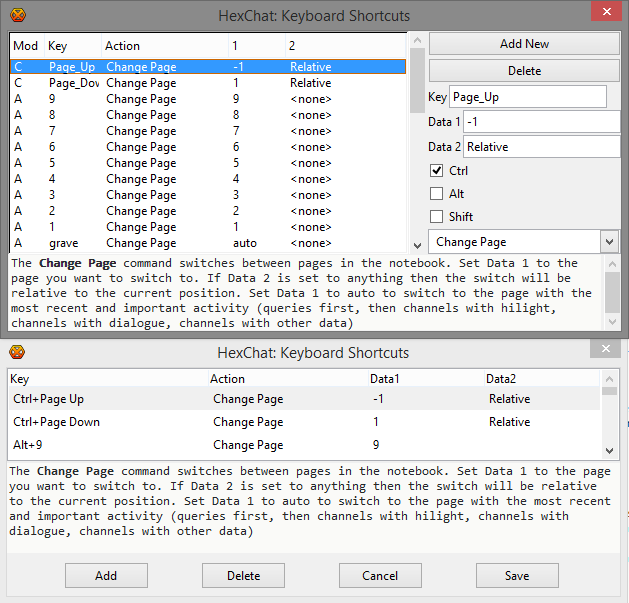 The main text box (xtext) has had a ton of improvements in rendering and selections. The major one is that all attributes are now actually properly rendered using the bold variants of the font and italics are now supported. Another before and after:

Lastly the input and search box had some improvements. The search box is now a bar above the input instead of a popup window; This removing of annoying popup boxes has also been extended to other areas like the network list as well. The input box can now render attributes directly (this extends to the topic bar but its less usable there) and spell check can finally handle contractions.